November, 27, 2015 — It was pitch dark at 2:30am in the morning. The only sounds that Imran* could hear were coming from the factory that was set ablaze a kilometer away, and the slogans against Imran and the rest of the Ahmadi community in Jehlum.

I was almost whispering, convincing my fellow Ahmadis to come out of hiding and show themselves to me, so that I could take them to a safe distance but there was no response, Imran told me over phone. However after repeated assurances, Ahmadi families hiding nearby revealed themselves to him.

Out of fear that I could be one of the mob who were hunting down Ahmadis in the area near Jehlum factory that every time I tried to call out to them, they would further hide downwards into the shrubs.

Members of the persecuted Ahmadiyya community gather after evening prayers outside a mosque on July 14, 2010 in Rabwah, Pakistan.

A few of the families who escaped from the factory during the mob attack had their toddlers hidden in their jackets. Ahmadi women can be identified by the distinct cut of their burqa, so they were asked to remove them and only cover heads with dupattas.

Imran is one of the Ahmadis who worked at the old chipboard factory, more than 4 decades old and owned by an Ahmadi businessman in Jehlum, Punjab. There are about 300 employees at the factory out of which Ahmadis are just ten percent, Imran claims.

At 5pm on November 21st, Imran was sitting in his office at the factory getting ready to leave for his living quarter across the road from the factory compound, when police personnel on motorbikes and a vehicle entered the factory. The policemen arrested the security in-charge of the factory who had an office at the entrance of the compound. Qamar Tahir, the head security officer at the factory, an Ahmadi by faith, was arrested on blasphemy charges, allegedly on a complaint from a factory staffer.

Imran: I am only telling you what I saw. That was the first time we had heard of any such thing as a blasphemy allegation against one of our own at the factory—it was a shock for us. The environment in the area surrounding the factory was not actively hostile towards Ahmadis. In recent years, there was a seminary built nearby which was a cause for some concern but nothing severe had happened to us, just regular everyday bigotry, which we’re used to as Ahmadis.

Police came with their minds made up that Qamar Tahir had burnt pages of the Holy Qur’an and thrown them in one the factory boilers. God forbid, why would he commit such a heinous act? We are practicing people, but the police pointed at Qamar Sahib saying that he had committed that act.

On Tahir’s arrest, his sons questioned the police, so police arrested them also. One of the boys is still a young teenager, less than 18-years-old. I saw that they were manhandling the boys, slapping them and pulling their hair, says Imran. After the arrests, police personnel arrived again at the factory twice, within a span of 30 to 45 minutes. On the last trip, the District Police Officer arrived and went to the boiler where the religious scripture was allegedly thrown. The factory staffer who is allegedly behind the blasphemy charges was the one with the police, Imran says. I did not see the DPO consulting any senior managers of our office. Instead, he went straight to the boiler with the complainant and then left. Qamar’s boys were later released.

That is when factory staffers saw men gathering outside the factory on motorbikes, and began to be alarmed. Imran and his Ahmadi colleagues quickly gathered and decided to leave the area. Within 45 minutes, Imran and a few families from the colony nearby which holds about eight homes of Ahmadi residents, had begun to organize an escape. Because Imran and some of the others did not have families, it was easy for them to leave the residential area. However, the youth were told by their elders to return to the area near the factory. The mob was at the brink of breaking down the factory gate, and loudspeakers had begun calls of protest and violent actions against Ahmadis. The young Ahmadi youth were needed to assist those hiding out and get them to safety.

It was a miracle how families inside the factory compound and those outside managed to gain some distance, as the hunt had started by the mob then.

The night had grown darker. The mob began to loot, and then, to set the factory on fire.

When the angry men moved towards our quarters, they were told by some non-Ahmadis to only target the living quarters of Ahmadis, I was told by my contact. They stole from our residences and then set them on fire. They had also started running in the direction of Ahmadis who had managed to flee with batons and torches.

Ahmadis hid in the fields behind small hills, in deep nallahs (canals), and in thorny shrubs, hungry and scared for hours. The subsequent rescue operation by the volunteers of the community – without any help from the law enforcement personnel – went on till 6am.

By 3am, I took some of the families, and through alternate routes, and once with the help security guards from another colony, I managed to take them to our cars on the main road, after which I had to help with ensuring that Ahmadi residents of Jehlum city leave the town also.

The police told Ahmadi volunteers guarding the community’s worship places that leaving the premises was the only way of saving Ahmadi lives.

The Ahmadi volunteer at our mosques in Jehlum city were advised by the police to leave. They told our men that they could not guarantee safety of Ahmadis inside the mosque from the enraged mob, and assured them that mosques would be protected.

The arson attack at the factory, the incitement of violence against the community, the looting of valuables and a roadblock on the Grand Trunk road went till early hours of the morning too.

Within 24 hours of the arson attack on the factory, an area near Jehlum city, Kala Gujran, saw another wave of violent attack on Ahmadis. An active anti-Ahmadi hate campaign had been going on in that area for a while, the community says. But despite the presence of heavy contingent of law enforcement personnel, one of the places of worship could not be protected. When the enraged mob reached the said worship place, the police had to intervene and in a rare incident of fairness rescued three Ahmadi youth from inside the worship place.

The 25-year old-Imran is friends with those men, My friend told me that the mob wanted to lynch them, so police told them that they are arresting us – the Ahmadis, and this is how they took us out.

Now, almost 40 displaced Ahmadi families from the burnt factory, and Jehlum city and Kala Gujran are stranded and unsure of their return despite the start of a police investigation into the incident.

Internal displacement is not rare for Ahmadis of Pakistan. Many from Balochistan, Sindh, Khyber-Paskhtunkhwa and parts of Punjab have moved due to threats to their lives or due to the increasing vulnerability they feel living outside the town of Rabwah—the town with highest number of Pakistani Ahmadis living in an area.

Muhammad Boota and his fellow Ahmadis from Gujranwala still do not have a stable life, more than a year after the murders of his mother, two daughters and the unborn baby of his sister at the hands of a similarly violent mob in Gujranwala in July 2014. A violent mob wanted to burn the women and children alive inside their homes in the Arfat Colony area of Gujranwala as penance for alleged blasphemy by an Ahmadi youth. About 120 Ahmadi residents of Gujranwala fled their homes for safer locations after murders of innocent unarmed woman and children. Those who dared to come back and restart their lives are failing.

Boota: Some of my extended family have tried to resettle, but their previously smooth running businesses are not enough to get by now. Nobody is giving our boys jobs. When anyone enters into our stores for services, people in the area tell them to avoid doing business with Ahmadis. In fact, nobody is willing to buy my property, which is on a prime location.

Boota and his family are homeless. For them, living in Gujranwala is impossible but he cannot be so far away that he cannot follow up on the murder cases of his loved ones. There is also a constant pressure from the cohorts and families of the five men who are in prison for the murder of Boota’s mother and daughters.

After losing his children and his mother, Boota wanted due procedure to be carried out by the police and the courts. But the investigation for the murder cases was not initiated until well into 2015 — after the young man accused of blasphemy was acquitted. The message government officials were sending was clear: they would consider the murders of Boota’s family justified if the young Ahmadi man had been found guilty of blasphemy.

The police would call us, take the side of the attackers and murderers, tell us we are small in number and those men could target us again, so the best solution was to forgive them the murders. Even now, the man Sadam, whose Facebook post and false allegation led to the arrest of the Ahmadi youth and murders of my family is out on bail.

Boota tells me that on November 22nd, a congregation at a banquet hall called Bhatti Marriage Hall in Gujranwala sang praises for Mumtaz Qadri, the killer of Punjab governor over a blasphemy allegation, and complimented the men arrested for the murder of his loved ones’; those arrested and charged with murder include Shia and Deobandi men.

I keep getting these messages that if we did not take our case back, our community will be targeted again in a more violent attack. 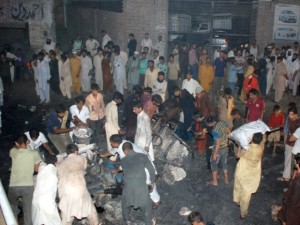 Now Muhammad Boota looks at the Jehlum attacks and his hopes diminish further because he sees persecution thriving in Punjab.

As for Imran, he never thought that the situation in Jehlum would escalate to the point where Ahmadis would have to flee. While there are no deaths or injuries from the Jehlum incidents so far, the trauma and fear is immense. A few years ago, Imran had witnessed a hate crime against an Ahmadi acquaintance in Punjab and had to take the bleeding man to the hospital after he was shot. That physical violence was nothing compared to the utter fear of Jehlum. There is no comparison.

After the unveiling of the National Action Plan in the country, there have been efforts to curb hate speech and arrests have been made. But the government has itself also demonized the Ahmadi community. Aside from anti-Ahmadi laws on the books, government officials recently banned religious literature of the community by categorizing it as hate literature. Many Ahmadis continue to languish in jails on blasphemy and other faith-based allegations with little attention paid to their legal rights. While Ahmadis cannot assemble for religious purposes and are still forced by law to deny their religious identity, groups like Aalmi Majlis-e-Khatm-e-Nabuwat are free to incite violence against Ahmadis. The government does appear to be cracking down and arresting people over the factory fire and the mosque attacks in Jehlum, but for affected Ahmadis, life will never be the same.

*Names have been changed where indicated to protect the identity of interviewees.

Rabia Mehmood
Rabia Mehmood is a multimedia journalist and researcher based in Pakistan with interest in religious persecution, gender and human rights. Mehmood has been the IWMF Elizabeth Neuffer Fellow at MIT. @     Facebook