Chairman of Pakistan’s “Ruet-e-Hilal Committee” Mufti Muneeb-ur-Rehman has called on the Government to execute Ahmadis as they do not believe in the finality of Prophet Muhammad. 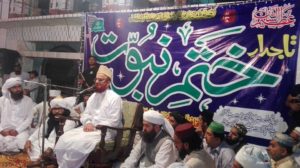 He made the comments on Saturday, while speaking at a KhatmeNabuwat rally in the village of Lalian. Mufti Muneeb ur Rahman said

The village of Lalian where the rally took place is located a few miles from the town of Rabwah, which has the highest concentration of Ahmadis in Pakistan.

He said “The young generation should contact Islamic Seminaries in order to save themselves from the propaganda of Qadianis (Ahmadis). Explicit programs on Internet and TV are ruining the youth.”

He went on to say “The first Caliph of Islam destroyed those who denied that Prophet Muhammad was the last Prophet, at the same time Molana Shah Ahmad Norani along with 27 other clerics played a keyhole in having the Ahmadis declared as non-Muslims. Muslims should also boycott Qadiani (Ahmadi) owned businesses and products.”