Police and Army personnel were called in on Monday as a Muslim mob armed with guns and rocks attacked a Mosque in central Pakistan. 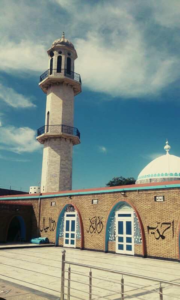 The mob which numbered over 1,000 was part of a procession celebrating the birthday of the Islamic prophet Muhammad when it attacked the minority Ahmadiyya community’s Mosque in Dulmial village, Chakwal. Around 40 worshippers who were present in the Mosque locked themselves in as the mob opened fire and hurled rocks.

After gaining control of the Mosque, the attackers burnt property inside the building, including carpets. They also washed the building to bring it “under the influence of Islam.”

A spokesperson for Ahmadiyya Muslim Community claimed that one Ahmadi was killed in the incident, but was unable to identify the dead.

The Government of Punjab said it was “following up” on the “Chakwal incident”.

Important: Punjab Home Department is following up Chakwal incident. The local admin & police are at the spot & handling the situation.

We are deeply concerned about reports of an ongoing mob assault on an #Ahmadi site in #Chakwal, including reports of a fatality.

In a petition filed with the local Police department a few weeks ago, Local clerics warned the Police of ‘extreme measures’ if the Mosque was not “liberated” from minority Ahmadis. The petition said:

The petition which was signed by over 500 people was started by a Pakistani-Canadian, Haji Malik Rashid Ahmad, who is a resident of Mississauga, Ontario. Ahmad traveled to Pakistan to file the petition against the use of Mosque by Ahmadis. Sources claim the Canadian resident is one of the main “agitators” in the Chakwal Mosque attack.

Ahmadiyya is a minority sect of Islam which has been declared non-Muslim under Pakistani law. In 2010, 90 Ahmadis were killed in a twin attack on Ahmadiyya Mosques in Lahore.