Indonesia’s Ahmadis: Refugees In Their Own Country 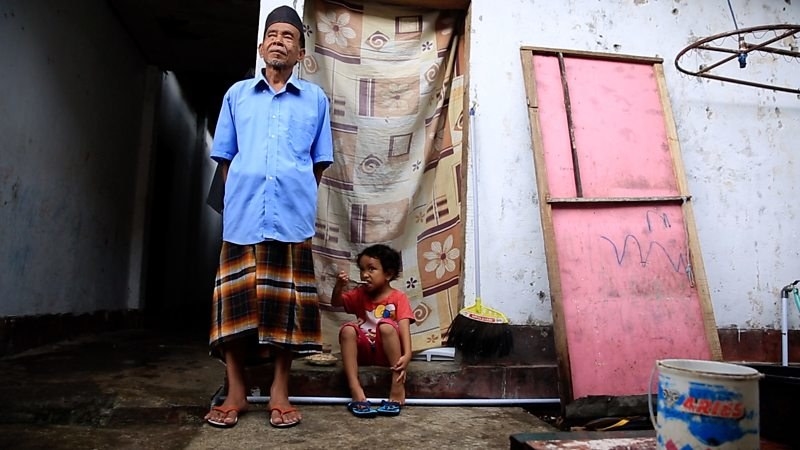 A small building on the edge of a green rice field is the place Syahidin is raising his four children. Facing the area of rice fields the house which is located in Hamlet Ketapang, West Lombok, looks ideal for family living.

Through the walls of the living room and bedroom, you can see the rice paddies that seem to stretch all the way.  Jackfruit tree protects the yard and the former porch. It’s just that the house is now just walls and a roof.

“We only moved into this house a year before we were forced out, at that time, the mob ransacked the house, the wall clock was broken, the door was broken down, the windows were damaged. All the contents of the house were looted, door frames, window sills taken by people who disliked us, ” said Syahidin.

He added while doing the destruction, the mob shouted abuse at them:

“Take the property of Ahmadiyya people because they are misguided.”

He and his children and his wife and dozens of neighbors witnessed their property destroyed and taken in the attack on the Ahmadiyya community in Ketapang back in February 2006. 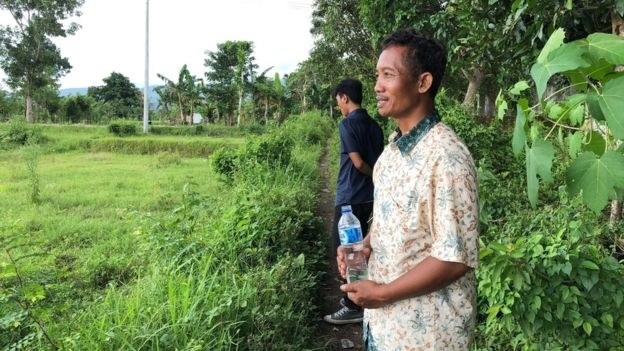 Syahidin does not know when his dream to re-occupy his property will come true.

“My first child when he was little always wanted to be put to sleep near the window because of the light breeze.”

“He always sleeps well here, and if his mother goes away he always sleeps soundly as long as it is near that window,” said Syahidin while showing the location of the bed in his former bedroom.

Now, he can only visit his house and his rice field in Ketapang Hamlet, about three kilometers from his refugee camp, because there is no concrete policy from the local government to restore the rights of Ahmadi refugees.

Putting the trauma behind, Syahidin feels lucky that the crisis in his life was not able to shake his faith. He is also proud that his first son is graduating from college. To earn a living to sustain family life, he works as a motorcycle taxi driver in Mataram.

Originally Syahidin expected to be in temporary place for a short while before returning to his village but Wisma Transito has been a transit point for Syahidin and 124 other Ahmadi refugees for the past 12 years.

Attempts to re-occupy their homes were made by some families in 2010 but they were once again expelled by the mob and had to return to Wisma Transito.

In an interview with the BBC Indonesia, the West Lombok district head Fauzan Khalid stressed that the Ahmadiyah refugee issue was handled in parallel by the provincial, district, and municipal governments.

However, according to him, since taking office in 2016, he has never been invited to negotiate the fate of refugees with both government officials. 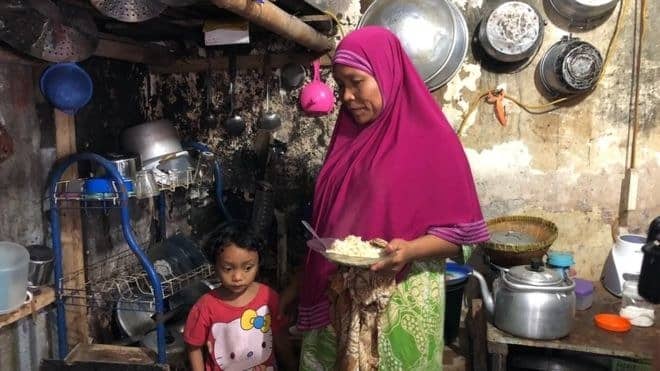 Nurhayati’s fried rice looks nothing special. In addition, rice, salt and soy sauce, no additional vegetables or meat are in the skillet.

But for her children, the fried rice is at fulfilling, at least for now.

“We often only eat rice because we do not have enough money to buy other food, my husband is old so he can not always work,” she said.

The family occupies a space blocked with a plywood board with cardboard patches with holes in them.

“Maybe the solution is that, even if later there is a policy for them to return to their homes in West Lombok, I urge them not to isolate themselves,” said Regent of West Lombok, Fauzan Khalid.

The ‘them’ referred to by the regent of West Lombok was to the Ahmadiyya followers who have been refugees in their own country for the last 12 years even though they have houses and land.

Until now there are no signs that they can move from the shelters in Mataram and once again live in their own villages. 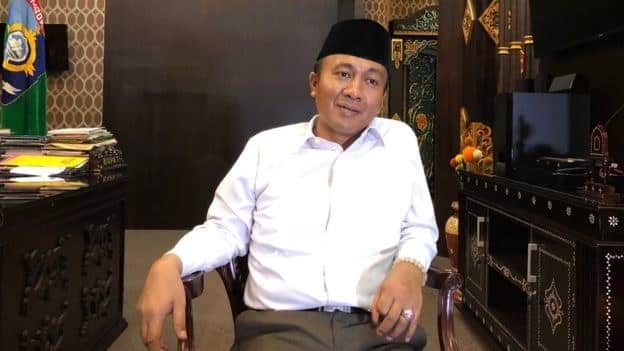 “We wish Ahmadiyah to be the same as other West Lombok people, Hindu and Christians also live in Lombok, but they do not isolate themselves Fauzan Khalid said in a special interview with BBC in Gerung, West Lombok.

However, Fauzan Khalid pointed out that the Ahmadiyah refugee problem is not only the responsibility of the district government but also handled in parallel by the provincial and municipal governments.

Up to now the problem solving has not been discussed since he took office more than a year ago.

Asked whether the district government would also approach the parties opposing Ahmadiyah in its territory so that the Ahmadiyah would not be expelled again, Fauzan Khalid promised to guarantee their safety.

“We are ready to accept them as long as they do not be exclusive and I am sure we can have them moved back to West Lombok again, we are ready to protect them but on condition that they are not exclusive.”

“They must blend in with the community just like other believers.” 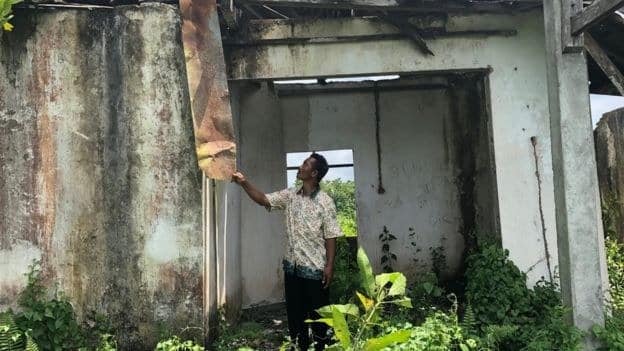 In an interview with a duration of about 15 minutes, the word ‘exclusive’ attached to the Ahmadiyya community appears dominant. I then went back to the refugee shelter of Ahmadiyah in Wisma Transito, Majeluk Village, Mataram, the next day.

There on a bench, Syahidin, the leader of the refugee camp meets me.

“We are in Lombok, that is not exclusive but …… exclusive,” he said.

Syahidin added that at first, they were living together with other people until a number of events happened to Ahmadi people. He is a native of Lombok, Sasak tribe.

“There were Ahmadis in Pancor (East Lombok) praying together in the mosque, a person was taken and thrown into the pool, and the Ahmadis were told they could no longer wash their clothes as they were more unclean than dogs,” he added.

For Muslims in general and the Majelis Ulama Indonesia (MUI), Ahmadiyah is a heresy.

The principal difference concerns the Ahmadiyya belief that its founder, Mirza Ghulam Ahmad, was a successor. This view is contrary to the belief that Muslims have agreed in general that the Prophet Muhammad is the last prophet, a ‘sacred’ faith. The distinction between prophethood then raises various prejudices about Ahmadiyya. 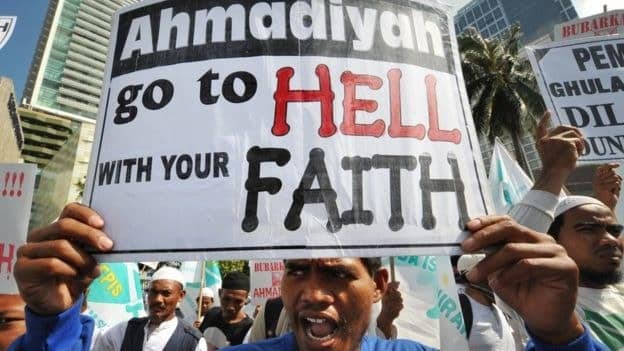 I contacted Catur Wahyudi, a sociologist, and lecturer of FISIP Universitas Merdeka Malang, who had done research on Ahmadiyah. According to him, the exclusive form of Ahmadiyya is a reaction to the actions of the mainstream Islamists who justify them as non-Islamic, misguided and misleading.

“They pray in their own mosque, marry only with their own community, and perform other worship only within the community.”

Syahidin is now waiting for a breakthrough from government and religious institutions such as MUI.

“My feelings have been hurt, we have heard religious leaders call us Infidels and perverted. Moreover, MUI says that we are deceivers and misleading people”

A resident who lives not far from Wisma Transito, Iqbal, admits that he often interacts with Ahmadiyah refugees and shakes hands at the festival.

“In the market, non-Ahmadiyah mothers also buy goods from refugee merchants,” he said.

Ahmadiyya researcher, Catur Wahyudi, from Merdeka University of Malang found that apart from the issue of worship, the Ahmadiyah community has strong inclusiveness.

“They are against each other, but still joining each other in celebrations, visiting each other during illness, breaking fast together, social activities, business etc” said Catur Wahyudi.

Still, according to him, Ahmadis, as a community have a strong commitment towards their nation and they strongly support the legitimate government and have a high social and solidarity spirit for fellow human beings. 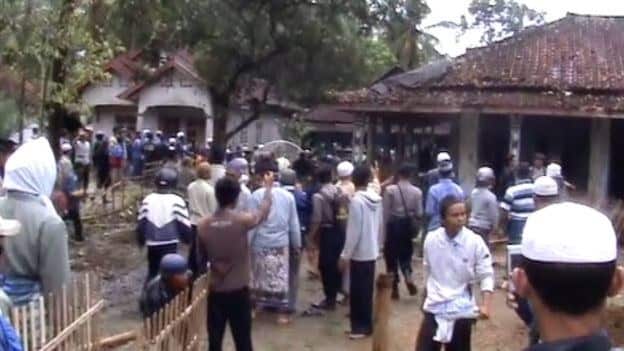 Among them, there are midwives, there are teachers and traders. Some have been expelled from Umbulan Village, District Cikeusik, Pandeglang District, Banten Province.

“The memory of the incident is hard to lose because the incident was so great that it was like a tsunami, I was shocked, the sadness was repeated again,” said Nayati, with tears.

The incident she is referring to is a clash between her family members – partly who were Ahmadi and the protestors from outside Cikeusik – protesting against the Ahmadis.

Nayati who is 40-years old became Ahmadi because of her brother, Parman, who studied in the southern Philippines. Her brother, who also served as an Ahmadiyya preacher, converted to Ahmadiyya in February 2011. They were both expelled by the mob after a bloody clash left three Ahmadis dead. Nayati watched it all.

“The event was very traumatic, I worry if something like that was to happen again, what will happen to my children”

“I want to educate my children, send them to school for more advanced studies. I have strong faith in God which makes me strong but power also comes from children,” said Nayati.

Some of Nayati’s hopes have come true, because her eldest son is now working in Japan after finishing his education in 2017. He also has a home in Gondrong, Tangerang, which he now occupies.

However, Nayati also craves to live again peacefully and safely in her village. There she still has a house, and fields. The house is empty. The fields and paddy fields are said to be processed by someone who does not “adequately compensate” her. 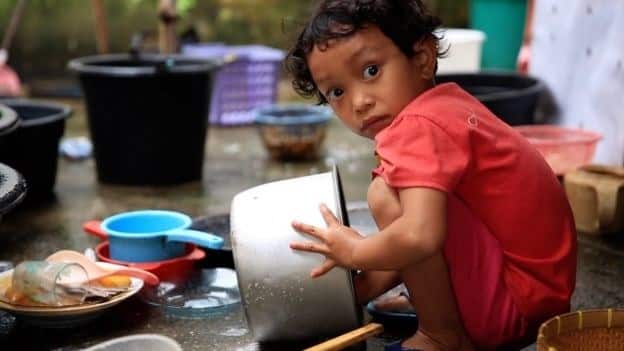 By road trip from Jakarta, I drove to Cikeusik. Travel overland for several hours through the green countryside was endless.

Is it possible that Nayati and his family could return to live side by side with other residents in Umbulan Village, Cikuesik Sub-district, their birthplace?

“Maybe if the Ahmadiyya come back here, but the scholars who are in Cikeusik District especially and those in Banten Province generally who would not allow it” said Chairman of Cikeusik Ulama Council, Haji Amir, who is also a community leader in Umbulan Village.

As for the conditions of return, according to Amir, they must “repent back to Islam” and mingle with the other villagers.

On the first condition, it seems difficult to find a common ground for the expulsion of the Ahmadiyya community from their own village. Because the Ahmadiyya congregation believe they embrace the teachings of Islam as taught in the holy book of the Quran.