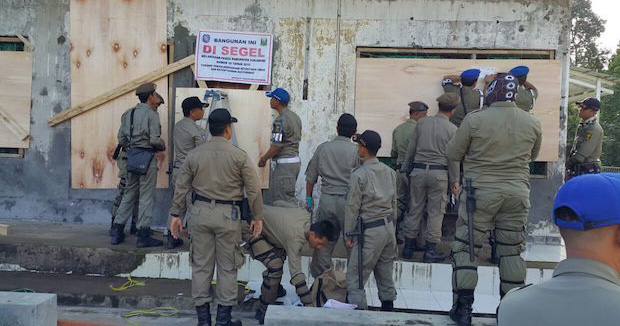 An Ahmadiyya mosque in West Java was closed down by a Police Unit Tuesday morning. The Al-Furqan Mosque which is located in Parakansalak subregion of Sukabumi district was built in 1975 and has been used by the 200 strong Ahmadi community in the region since. Earlier, similar incidents have occurred twice, on March 31, 2015, and June 29, 2015, the Mosque was closed down for not having permission from the Provincial Government of West Java.

Spokesman of the West Java Police confirmed the sealing of the Al-Furqan mosque saying “The Mosque was sealed by the municipal police of Sukabumi, The sealing was done as part of the legal action for violating Sukabumi Bylaw number 10/2015 which deals with implementation of Public order and peace in society,” he said.

Yusri said, during the sealing they was carried out by the 160 police personnel, members of the National and Political Unity Board of Sukabumi and a village official.

The sealing process began at 7 am, when two trucks of municipal police gathered around the mosque area, The municipal police installed a wooden bar on the Mosque door and posted flyers stating the mosque violated Bylaw No.10 2015 of Sukabumi regency.

Head of Ahmadiyya Al-Furqan Mosque, Hanif questioned the forced closure and said that the officials were not able to explain the why they sealed the building that was just being renovated.

Hanif who witnessed the police actions this morning said, there was no notice or warning and no legal procedure for such a closure was followed by the officials.

“We condemn the sealing, no prior written notice was given, We do not know for what and how long the Mosque has been sealed for, When we ask for a copy of written orders, they refuse to give”

He said the sealing was done on the request of several groups who are not tolerant of the Ahmadiyya belief. “There was a demand by some residents who want our mosque closed. They submitted a letter to the regents, but we do not know of its contents,”

Hanif asserted, that the local community never had any problems with the Mosque goers.

“I am sure, rejection and request to seal the Mosque do not represent the views of the people around the mosque.”