Historic reception held in honour of Khalifa of Islam in Japan

The World Head of the Ahmadiyya Muslim Community and Fifth Khalifa, Hazrat Mirza Masroor Ahmad addressed an audience of more than 100 Japanese dignitaries and guests on 9 November 2013 at a Special Reception held at the Mielparque Hotel in Nagoya.

During his address, His Holiness explained Islam’s true and peaceful teachings; he condemned all forms of terrorism and extremism; he spoke movingly about the Japanese people and he appealed to Japan’s leaders to strive for world peace.

“Islam’s true teachings are so complete and beautiful that at every level they guide believers towards an enlightened path lit up with love, affection and brotherhood.”

The Khalifa said it was a source of regret that many Muslims had deviated from these true teachings. He said the root cause was the influence of religious scholars who cared only for their own power bases and personal interests. He said that whatever such “so-called scholars” taught had “nothing to do with Islam’s pure and noble teachings.”

His Holiness said that suicide bombings and terrorist attacks were to be absolutely condemned and that the Quran taught that the unlawful killing of one person was “akin to killing all of mankind”. 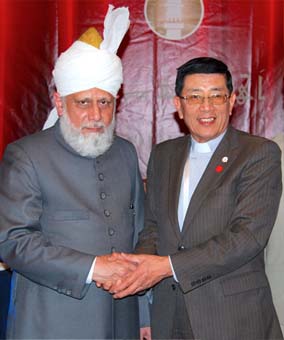 “The Arabic word from which the word ‘Islam’ derives means to spread peace and security and to spread compassion and love. These teachings form the reality of Islam. Furthermore, Allah commands Muslims to not only adopt these attributes themselves but also to spread peace, love and affection throughout the world.”

“Our Mosques are symbols of peace and beacons of light that illuminate their surroundings… Our Mosques are not built to cause any pain to mankind, but on the contrary are built for the sake of protecting and loving all people.”

Referring to the past experiences of the Japanese people, Hazrat Mirza Masroor Ahmad said: 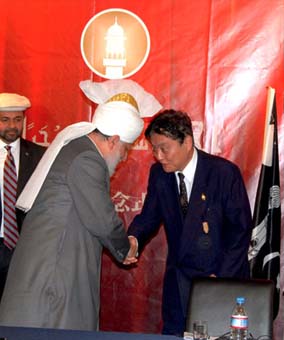 Concluding, Hazrat Mirza Masroor Ahmad outlined the need for all parties to work towards the paramount goal of peace and a fair society. He called on the Japanese nation and its people to play its role towards this end.

“In my capacity as the Head of the Ahmadiyya Muslim Jamaat, I have been constantly warning the people and nations of the world that it is imperative that we spread love and affection in today’s world, rather than spreading hatred and igniting grievances amongst one another. The need of the time is for us to step forward with a spirit of reconciliation because if we do not become true ambassadors of peace a great calamity could easily befall the world.”

“Rather than looking at each through a lens of hatred, we should all look at one another through a lens of love and peace… I pray that instead of spreading malice and hatred, all parties join together and make a collective effort to end all forms of evil, so that our future generations can be saved from that indescribable destruction that would certainly arise if nuclear weapons were ever used again by any country.”