Malice, hatred and discrimination against Ahmadi Muslim students is growing in Pakistan as part of a wider scheme to cripple Ahmadis educationally, economically and socially. Ahmadis were declared a non Muslim minority in Pakistan by the amendment in the Constitution and they cannot perform their religious duties in open places, nor can they declare themselves Muslims. And even then, they cannot enjoy the rights of the minorities as guaranteed in the Constitution of Pakistan.

A campaign against Ahmadi students, particularly women students, has been ongoing, especially in vocational and professional institutions, colleges and universities. Ahmadis are accused of being “the worst enemies of Islam and Pakistan.” It is a common practice by miscreants to paste highly slanderous and provocative posters on walls in the universities and colleges.

One third year student at the National Textile University, Faisalabad, Punjab province, Ms. Hina Akram, had to leave her studies on account of intense faith-based harassment at the hands of some members of the university. One of Hina’s teachers came to know she was an Ahmadi and reacted furiously; He told Hina that she was a Kafir (infidel) and would suffer the consequences. The teacher and his colleagues started a hate-campaign against Hina. Hina’s father complained to the University but nothing was done and sadly, Hina was forced to terminate her studies as she could no longer face the continued hostility.

However, the persecution, the oppression, the injustice, the denial of their right to education, to foster their talents and academic development is encouraged by the legislation and provision by Ordinance and the liberty accorded to the Mullahs (religious leaders) and their accomplices.

Hina’s future, her aspirations, her hopes and ambitions, has been completely destroyed like those of scores of other Ahmadi female and male students. They are victimised for being members of a Community which all over the world carries the reputation of being peaceful, law abiding and highly respectable among faith communities.

The federal government has still not taken seriously the case of the rustication of the 23 Ahmadi students from Punjab Medical College besides the several reminders from their parents and rights organizations. In the far flung areas the students from the Ahmadi community have to face such practices of the local religious groups at school level which forces Ahmadi students to hide their identity or to migrate to urban centers where Ahmadis face less persecution. The IJT, under the guidance of extremist religious leaders, have been allegedly assigned to clean the educational institutional particularly, universities and professional colleges, of Ahmadi students and the staff of the educational institutions are being forced to provide details of the students.

It is reported that the Punjab provincial government has very soft attitude towards the extremist religious elements including banned sectarian groups and allow them to conduct their activities freely in the province. Please see the links;
http://www.humanrights.asia/news/ahrc-news/AHRC-STM-126-2011
http://www.humanrights.asia/news/ahrc-news/AHRC-STM-077-2011

Such cases of blatant violations of human rights, mass terror, stark discrimination, religious vendetta and abominable social harm are a challenge to the World Community to be addressed resolutely and with determination.

The government of Pakistan must not allow the extremist religious groups and parties to persecute the minority groups and run their own parallel government by denying the students from the Ahmaddiya community their right to education. The rusticated students should be readmitted in their educational institutions. The government’s policy of appeasement of religious extremist groups is undermining the rule of law which has gone under the hands of religious gangs and sectarian bigots. 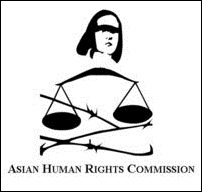 The Government of Pakistan must do more to honour its commitments to the international charters. Declarations and technical assistance must be provided to ensure that every citizen of Pakistan has the fundamental right to education without any discrimination on account of faith, religion or belief. The Harare Commonwealth Declaration of 1991 made it obligatory for every Member State to provide special facilities for the education and equal rights of women and ensure all women are treated equally without any prejudice or discrimination. Article 26 of the UDHR (Universal Declaration of Human Rights 1948) clearly emphasises that everyone has the right to education and it will be equally accessible to all on the basis of merit, which unfortunately is not the case for Ahmadis in Pakistan.

Pakistan is a signatory to UDHR. It is also a signatory to the Harare Declaration and various bilateral agreements to qualify for assistance for the provision of education.

The denial of education to Ahmadi Muslim women and men in Pakistan is a deplorable act which needs to be denounced. International organizations, donors and others who fund the provision and development of education, particularly professional and technical education must ensure that Pakistan faithfully adheres to the word and spirit of the charters and agreements it has signed and create an environment which complies with Article 26:2 of the UDHR which states;

‘Education shall be directed to the full development of the human personality and to the strengthening of respect for human rights and fundamental freedoms. It shall promote understanding, tolerance and friendship among all nations, racial or religious groups’.

We solicit the World community to continue its pressure upon the Government of Pakistan to restore the rights and freedoms of Ahmadi Muslims including civil rights and their right to education and intellectual and professional development.