The Ameer and Missionary in charge of the Ahmadiyya Muslim Mission in Ghana, Maulvi Dr Wahab A. Adam died on Sunday, June 22 at the Korle Bu Teaching Hospital after a long illness. Until his death, he was an executive member of the NPC.

Maulvi Abdul Wahab Bin Adam was born in December, 1944, at Brofeyedur – Adansi, Ashanti Region. After his secondary education at T.I. Ahmadiyya Secondary School (Kumasi), he proceeded to the Ahmadiyya Muslim Seminary and Ahmadiyya Theological University, Rabwah, Pakistan, where he received Diploma in Arabic and Honours Degree in Theology and Islamic Jurisprudence in 1960.

In 1971, he was appointed to the high office of the Deputy Head of the Ahmadiyya Muslim Mission of the United Kingdom, an office he so creditably held until he was elevated to the prestigious position of Ameer (Head) and Missionary-in-Charge of the Ahmadiyya Muslim Mission in Ghana. He has steered the affairs of the Mission with distinction since 1975.

On Wednesday the mortal remains of the late Dr Adam, were laid at the forecourt of the State House for a four-hour burial service and the Muslim Janazah prayers.

The remains, after the service was then taken to the Ahmadiyya Muslim Cemetery at Kosoa, in the Central Region where he would be laid to rest. Dr. Wahab Adam left behind a wife and 7 children.

In a tribute read on behalf of President John Dramani Mahama and Vice President Amissah-Authur, Mr Mahama Ayariga, Minister of Information and Media Relation, noted that the late Ameer had paid his due to the Ghanaian society and what the country needed to do in honouring him was to continue upholding his passion for peace, patience and humility. He said the country had lost a son, a patriot and a pillar of socio-religious equilibrium.

On behalf of the National Chief Imam, Sheik Dr Osman Nuhu Sharubutu, Alhaji Mohammed Gado, in a tribute, described the late Maulvi Adam as a great man of wisdom, unifier, leader, teacher, disciplinarian and a man of many paths.

He said the late Ameer played a key role in the activities of the Ghana Conference of Religious Peace (GCRP) and was the first Muslim to occupy the seat as the President, which the GCRP had never regretted, adding, “His legacy shall inspire the Muslim Community in Ghana.”

Rev. Dr Kwabena Opuni-Frimpong, General Secretary of the Christian Council, on behalf of the council, noted that late Maulvi Adam had shown the world that people with religious divergence can live together for national development. 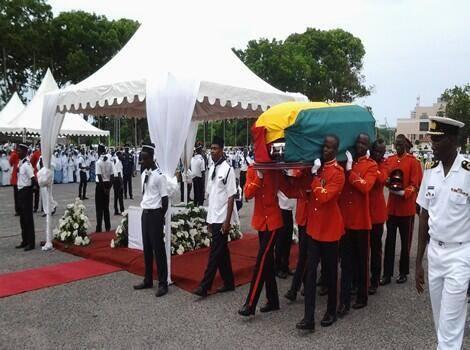 A Presidential hopeful of the NPP for the 2016 elections, Alan Kyerematen has also described the death of Maulvi Dr. Abdul Wahab Adam as shocking and a sad one.

Also the 2012 flagbearer of the New Patriotic Party (NPP), Nana Akuffo Addo said he is deeply saddened by the news of the passing of the Ameer and Missionary-in-Charge of the Ahmadiyya Muslim Mission, Maulvi Dr. Wahab Adam.

Nana Addo expressed sincere condolences and sympathies to the family of the late Maulvi Dr. Wahab Adam and all Ahmadi Muslims across the country and the world.