Young Muslims are planning to turn up at Heathrow Airport and London’s rail and underground stations in force – to collect money for the Poppy Appeal.

Members of the Ahmadiyya Muslim Youth Association (AMYA) will be helping The Royal British Legion for the fourth year running as a mark of good citizenship and a testament to the Islamic edict of demonstrating loyalty to your country.

More than 300 AMYA volunteers will be stationed at train and tube stations across the city of London, as well as other parts of the UK, with the hope of raising more than £20,000.

This is part of a nationwide campaign by the AMYA to contribute to the country in different ways. Other initiatives have included blood drives, charity events, green initiatives, peace conferences, and interfaith meetings.

The Worldwide Head of the Ahmadiyya Muslim Community, His Holiness, Hadhrat Mirza Masroor Ahmad said:
“Muslims are obliged to be loyal to the country in which they live. Honouring those who fought to defend and safeguard one’s country is an important principle of Islam and in fact is an important principle of peace – especially when it is carried out with a sincere heart and for the sake of winning God’s pleasure.”

“I send my best wishes to the Ahmadiyya Muslim youth organisation who are supporting this year’s Poppy Appeal. I’m delighted to hear over 300 members will be out in force throughout November collecting at train stations and other places around the country. It’s great to see so many young people giving up their own time to help those who have served our country while remembering those who have paid the ultimate sacrifice.”

“Our beneficiaries come from all walks of life, as do our supporters, and we are proud to be an organisation that stands shoulder to shoulder with people of all faiths and backgrounds. We are grateful to the Ahmadiyya Muslim Youth Association for collecting for this year’s Poppy Appeal…

“The money they raise will make it possible for the Legion to provide our beneficiaries with £1.4million every week in direct welfare support.”

“Each year, hundreds and thousands of volunteers brave the cold to sell their poppies up and down the country…Among those giving their time -and hoping to raise thousands of pounds- are the Ahmadiyya Muslim Youth Association, who will once again be selling poppies at underground and railway stations. This volunteer work represents an essential part of the Ahmadiyya Muslim community’s really important contribution to UK national life – whether through helping to raise wider awareness and understanding of the Islamic faith, or fundraising and feeding the homeless, donating blood, and other charitable acts.

So I’d like to extend a big thank you to all those involved in the Ahmadiyya Muslim Youth Association… who will be out there with their collection boxes, selling poppies for the Royal British Legion.”

The Home Secretary Theresa May said: 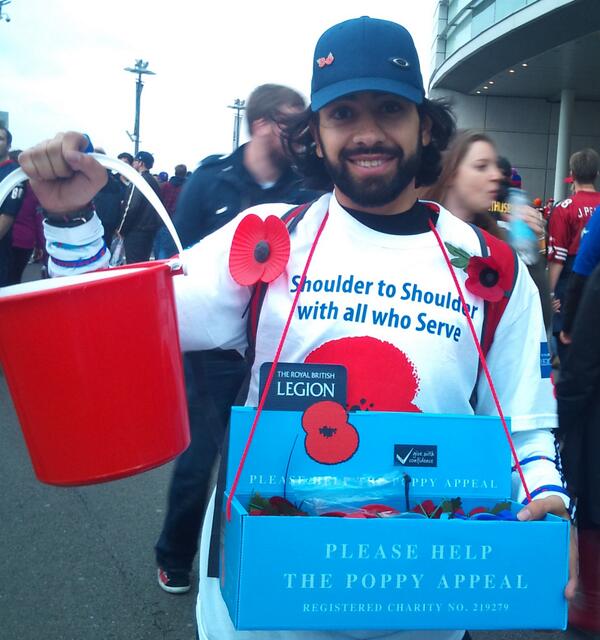 “The Ahmadiyya Muslim Association has a long tradition of raising money for good causes and has raised more than £1.5million for various charities including the Royal British Legion. I welcome this latest campaign by their youth association and would encourage everyone who sees them collecting for the Poppy Appeal to give generously.”

Commenting on the AMYA’s collections in London, the Mayor of London, Boris Johnson, said:
“The Poppy Appeal gives us all the perfect opportunity to give something back to those brave men and women who have served our country, as well as support those who have helped them in their time of need. I know Londoners across the city will be joining me to help raise over a £1million on London Poppy Day so that the Royal British Legion can continue its excellent and life enhancing work. The fantastic efforts of the Ahmadiyya Muslim Youth Association, which is hoping to raise a stonking £30,000, will help ensure we reach that target.” 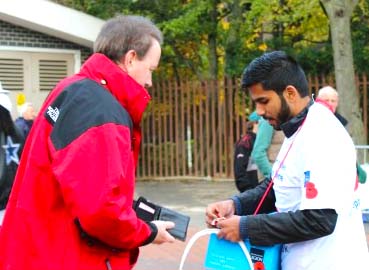 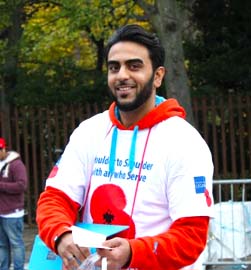