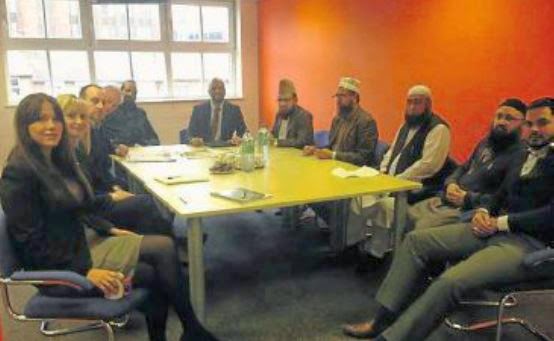 Luton on Sunday agreed to publish this double page advertisement (pp4-5). This was greeted with complaints by some local Muslims headed by the Preservation of Finality of Prophethood Forum (PFPF) which lead to a groveling response by the newspaper, assuring its readers that they ‘completely disassociate’ from the advertisement and apologize for offending “the Muslim community in Luton”, as though the offence caused by such a repudiation to the Ahmadiyya community is of no consequence at all.

This is yet another example of Muslim intimidation of the media into conforming to a narrow interpretation of sharia. The advertisement was accepted by the newspaper, and there is no editorial compulsion to endorse the content or message of any such promotion.

It really isn’t for Luton on Sunday to decide who is, or is not, a Muslim. It’s not as though all Sunni and Shia Muslims think the Ahmadis are outside the fold of Islam, and some who may have doubts still would not interfere with their right to identify as Muslim.

It is to be observed that the Luton on Sunday statement of apology refers only to ‘The Ahmadiyya’: the Islamic inquisition has clearly determined that they may not be referred to as ‘Ahmadiyya Muslims’, for the Preservation of Finality of Prophethood Forum (PFPF) has weighed their theology and found them quranically deficient if not heretical.

One doubts that this delegation made violent threats or even intimated that the Luton on Sundayoffices might be firebombed or their staff harassed. But clearly the newspaper came under some sort of pressure to “completely dissociate (themselves) from the content of the advertisement”, and this could only have come from a persuasive if not forceful assertion of the sort of narrow Sunni-sharia orthodoxy that is in force in Pakistan (via the malignant Wahhabi-Salafi strain), and which is being incrementally imposed upon or adopted by the British media.

The Ahmadiyya call themselves Muslims, and clearly some other Muslim groups are offended by this because the Ahmadiyya believe that other prophets followed Mohammed: he was not the ‘final seal’. This sort of religio-identity dispute is, of course, nothing new: the Church of England calls itself Catholic (and Reformed), which irks one or two (Roman) Catholics. But newspapers and other media are not exhorted by sundry zealous priests and cardinals to dissociate themselves from advertisements which might contain this historic assertion of Anglican belief. It is surely not for Luton on Sunday or any newspaper to take a dogmatic view of the deeply-held sensitivities of one religious denomination, or to impose a moral view of religious blasphemy when Parliament has abolished the concept.