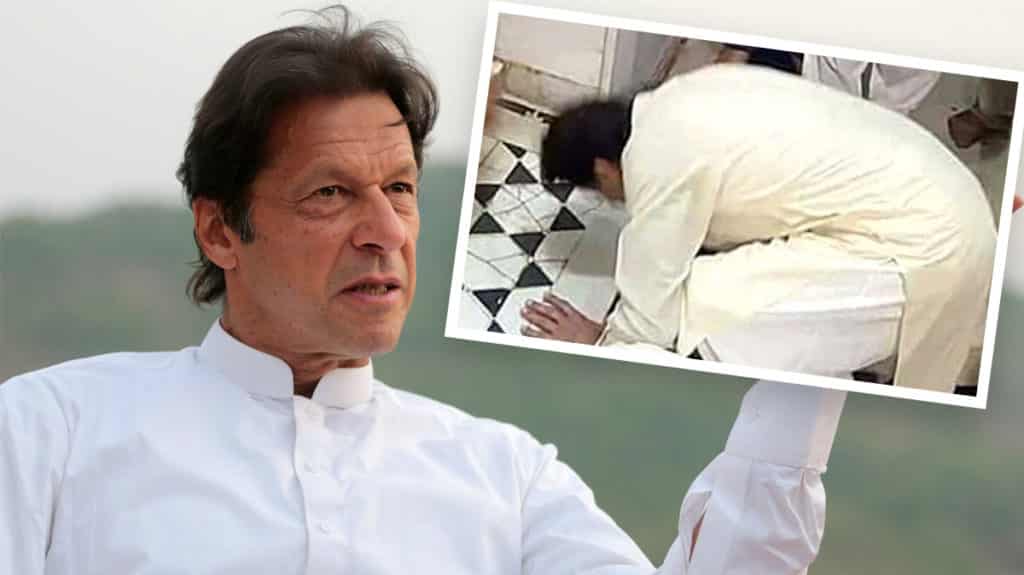 A video went viral on Thursday showing Pakistan Tehreek-e-Insaf (PTI) Chairman Imran Khan visiting the shrine of Baba Fariduddin GanjShakar in Pakpattan where he stopped just outside the shrine and bowed before the grave of the 13th century Sufi saint.

The social media went wild with immediate takfeers and counter-takfeers as Imran’s opponents believed the gesture to be a Sajda before the grave, which is haram according to orthodox Islam, while the PTI supporters sprang to the defence of their leader claiming his right to freedom.

I, for one, am completely convinced that religion is a private matter and no one has the authority to dictate others what they should believe in. While Imran Khan has already clarified that he was just kissing the ground, at least I wouldn’t have had a problem even if he was doing Sujood. Whether I believe it to be permissible in Islam or not has nothing to do with Imran Khan.

And there are countless occasions where PTI leaders and Imran Khan himself invoked the religious sentiments of the public against their opponents.

One such occasion was back in 2015 when a PTI leader Fayyaz ul-Hasan Chohan openly accused the then Information Minister Pervaiz Rashid of being ‘Ahmadi’ and questioned his beliefs as well. He openly stated that Pervaiz Rashid’s religious views were heretic and quoted Mufti Naeem’s Fatwa saying that Pervaiz Rashid had committed apostasy. Chohan has been PTI’s Central Deputy Information Secretary.

In 2014, Imran Khan announced a shadow cabinet during the sit-in. One of the cabinet members he named was Atif Mian, who according to Imran Khan himself is one of the top 25 economists of the world, but happens to be Ahmadi by faith. When questioned by a bearded interviewer in his container, Imran Khan not only retracted from his earlier stance but also categorically refused to bring any changes to the constitution.

PTI refused to promise reversion to the 1973 constitution

In a similar instance, when a PTI member went to the head of Jamaat Ahmadiyya to demand Ahmadi votes back in 2013, the Jamaat Ahmadiyya head said that the Jamaat wouldn’t vote for anyone unless promised the reversion of the constitution to its original form in 1973. The party never promised any such thing. So much for religious freedom already. 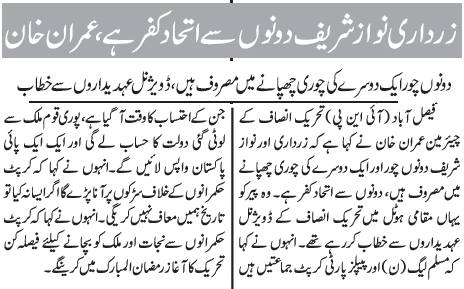 As early as in 2011, Imran Khan had declared any alliance with Nawaz Sharif or Asif Ali Zardari to be ‘kufr’. I don’t know how he feels about it now after having voted for PPP proposed candidate for the election of Senate chairmanship but what I do know is that back in 2011, he considered it apostasy to ally himself with any of the two.

And as late as 2018, PTI hasn’t stopped playing the Khatam-e-Nabuwat card against its opponents. Let alone Imran’s repeated appearances at various Khatam-e-Nabuwat conferences, his party leaders, his close aides and he himself have been fanning religious sentiments of the people against PML-N.
The first person to have raised the issue of the supposed change in the election forms was his closest ally Sheikh Rasheed Ahmad.

The next to go explosive on the floor of the House was Ali Muhammad Khan, PTI’s former MNA from Mardan.

When Tehreek-e-Labbayk staged a sit-in in Islamabad back in November 2017, PTI not only supported it on the social platforms, it kept blaming the then law minister Zahid Hamid too for altering the declaration. PTI MNA from Karachi Dr Arif Alvi is on record with his speech in the parliament.
PTI leader from Narowal Abrar ul-Haq incited people to violence, expressing solidarity with the religious fanatics surrounding the then Interior Minister Ahsan Iqbal’s home in Narowal. He even went on to say that PML-N leaders were ruining their afterlives.

Abrar ul-Haq didn’t even care to think of another fatwa issued against him. It was Labbayk’s Pir Afzal Qadri who had issued an apostasy fatwa on the doctor-turned-singer-turned-philanthropist-turned-politician-turned-retard-turned-takfiri.

So while I believe that it is Imran Khan’s personal matter, his right to religious freedom, to kiss the ground or kneel before it or do sujood or even reject such practices, I would call upon the PTI chairman, his allies, his aides, his party leaders and the supporters to be equally respectful towards other people’s religious beliefs too. PTI isn’t the only party enjoying constitutional and moral protection against fatwas, it is every human’s right to profess, protect, voice and preach their beliefs. Why doesn’t the party extend the right to freedom of belief to its opponents too?

Moreover, will the party be issuing an apology for its past actions? Will it apologise for having judged people for their beliefs? Ok, forget the apology. Will it even promise that it would not incite people to violence and fan their religious sentiments against its opponents in future?