The small town of Rabwah went into lockdown on Thursday as thousands made their way to attend the controversial ‘KhatmeNabuwat’ conference. 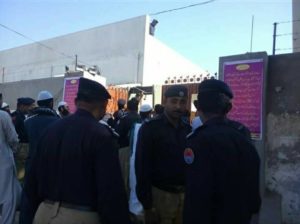 More than 20,000 people are thought to be attending the two-day conference which began on October 27th. The event has been organized by the controversial AMTKN (Aalmi Majlis – e – Tahfuze KhatmeNabuwat) movement, an organization described as a hate group due to its continued encouragement of violence against Ahmadi Muslims. The arrangements for the event have been made in collaboration with local Police, who are on hand to provide assistance.

“The purpose of the conference is to raise awareness about the provocative activities of Qadianis (Ahmadis), the organization actively works against Qadianis (Ahmadis) to prevent them from distorting the identity of Islam” 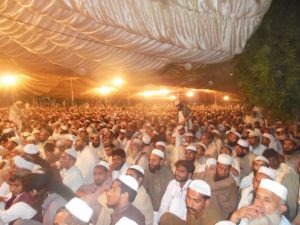 Nomani also confirmed AMTKN’s ties to the London-based Stockwell Green Mosque saying “we also have a center in Stockwell, London which serves as the headquarters of AMTKN in London”. The Stockwell Green had previously denied any links to AMTKN in Pakistan. The Mosque is currently under investigation for ‘promoting killing of Muslim Ahmadis sect’.

Speakers at the conference demanded that the Pakistan Government should stop Qadianis (Ahmadis) from publishing their blasphemous literature, books, and magazines and also demanded that those who fail to comply should be prosecuted under the country’ anti-Ahmadiyya laws.

They further added that they would never let the Government repeal the country’s blasphemy laws and the XX Ordinance (anti-Ahmadiyya Ordinance).

“Ahmadis are enemies of their own lives, death is hanging over their heads.” one speaker warned. 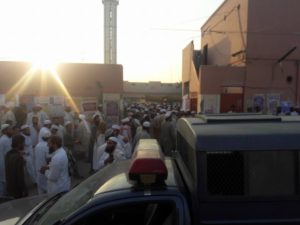 While other preachers urged attendees to “remove disbelievers (Ahmadis) through Jihad“, urging them to go back and “act against these traitors (Ahmadis) who are working against Pakistan”

Just days before, a huge cache of illegal arms was recovered less than 5 miles away from the conference location. Police recovered 19 rifles, 69 pistols, 6 sub-machine guns & over 22000 bullets.

Among those who attended were Sectary General Jamaat-e-Islami, Liaqat Baloch, and leader of Jamiat Ulama-e-Islam (JUIF), Maulana Amjad Khan.

Below is an excerpt of Rabwah Times’ interview with AMTKN Spokesperson Abdul Hakim Nomani.