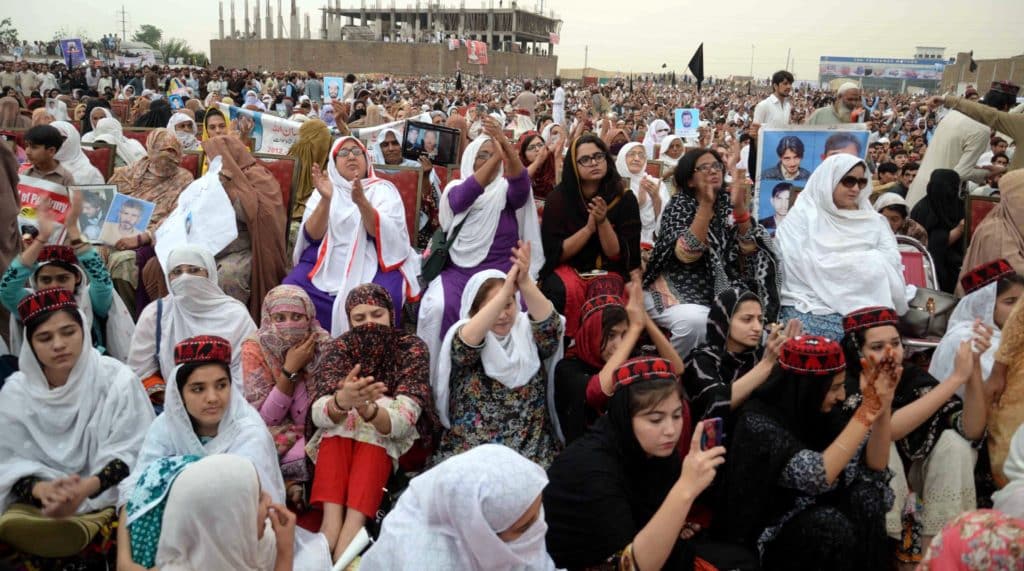 PESHAWAR: Thousands gathered on Sunday at Peshawar’s Ring Road for the gathering organised by the Pashtun Tahaffuz Movement (PTM).

Women, children and students have reached the venue with photographs of their ‘missing’ loved ones. PTM leader Manzoor Pashteen will soon address the crowd.

The PTM, which shot to fame after holding a fortnight-long protest in Islamabad against the extrajudicial killing of Naqeebullah Mehsud, called for today’s rally to reiterate its demands including the arrest of former SSP Rao Anwar and others involved in Naqeebullah’s ‘fake’ encounter. It is protesting against the ‘vip’ security being provided to Anwar, asking for the accused to be sentenced.

The movement is also protesting against curfew imposition in Federally Administered Tribal Areas (Fata), demanding recovery of missing persons and presenting them before a court and removal of landmines.

Have never been at a rally demanding basic human rights, such as an end to encounter killings and enforced disappearances, that has been as big as this. #PashtunTahafuzMovement #PashtunLongMarch2Peshawar pic.twitter.com/e5xT4bKUtC

Amid threats of a possible militant attack most probably in ‘gatherings’ besides section 144 imposed, the district administration of Peshawar issued a no-objection certificate (NOC) to the PTM, a day after it imposed a ban on Pakistan Zindabad rally following a threat alert was circulated from the Counter Terrorism Department (CTD).