Pakistan election: the 4m votes no one wants

As Pakistan’s election campaign enters its dying days, no town has escaped the attention of the country’s politicians as they crisscross the country, plastering every spare billboard, lamp-post and shop-front with posters bearing their heavily airbrushed faces.

Except Rabwah, a sleepy riverside settlement in the critical battleground province of Punjab. It is home to 40,000 potential voters who could safely be relied upon to vote whichever way the town’s elders recommend – a particularly large and reliable example of what Pakistani politicians call “vote banks”. And yet, in a constituency where the result could go either way, not a single party banner flutters anywhere in the town.

No one has tried to hold a rally on the wide, tree-lined avenues or make the promises heard everywhere else in Punjab of more development, less corruption and an end to electricity shortages.

All of the candidates have given the town a wide berth because the vast majority of its 60,000 inhabitants are Ahmadis, a religious minority vilified by extremists, who regard them as heretics, and shunned even by mainstream politicians such as Imran Khan.

Last week, Khan, the leader of the Pakistan Tehreek-e-Insaf party (PTI), vigorously denied he had ever asked members of Pakistan’s roughly 4 million-strong Ahmadiyya community to vote for him.

In an impassioned video statement, Khan promised to protect anti-Ahmadi laws and articles of Pakistan’s constitution that human rights groups have long criticised as deeply discriminatory.

The laws ban Ahmadis from “posing as a Muslim”, meaning almost any public act of devotion is a criminal offence, potentially punishable by death under the country’s notorious blasphemy laws.

In a statement, Khan said the “PTI totally subscribes to the articles of the constitution concerning Qadianis”, using a term most Ahmadis find deeply offensive.

For some liberal-minded young Pakistanis who have been energised by Khan’s promise to sweep away an established political order widely regarded as corrupt and ineffective, his support for discriminatory law has soured the campaign. The former cricketer has been criticised in the past for appeasing extremists, earning the nickname “Taliban Khan” for his policies, including a promise to abandon the army’s campaign against militants in the troubled territory bordering Afghanistan.

Ahmadis have long occupied a position of particular hatred among Pakistan’s religious extremists because of their claim that Mirza Ghulam Ahmad, the man who founded the movement in British India in 1889, was a messiah and prophet. For the dominant Islamic sects, that contradicts a central tenet that Muhammad, the seventh-century Arab merchant who established Islam, was the final prophet.

The theological dispute has led to intense persecution of Pakistan’s Ahmadis. More than 400 have been formally charged under blasphemy laws since 2000. Their crimes range from distributing religious literature, referring to their places of worship as mosques, and practising the Muslim call to prayer.

The laws have also helped foster a climate of violence with authorities often unwilling to stop fundamentalists publicly calling for the murder of Ahmadis. In 2010, a bomb flattened an Ahmadi mosque in Lahore, killing almost 100 people.

“I have read the Qur’an very closely and I know that those who do not recognise Muhammad as last prophet is not a Muslim,” Khan said in his video statement last week. In Rabwah, the headquarters of the community in Pakistan, Ahmadis reacted with shock, but little surprise.

“What he said was so unbecoming of a modern progressive man,” said Shameem Khalid, a retired naval officer. “He should have said that Ahmadis are equal citizens and they should be able to exercise their rights as equal citizens.”

Khan, who appears to be surging ahead as the county moves towards polling on Saturday, is unlikely to lose many votes by distancing himself from the Ahmadis.

The community is boycotting an election where any votes its members cast for their local candidate are also added to a secondary ballot for members of the national assembly that represent non-Muslim religious minorities. They say participating would amount to an admission that they are not Muslims.

A related problem prevents them from taking part in local council elections in Rabwah, a town the community founded in 1948 after land was bought specifically to provide homes for Ahmadis who moved from India after the creation of Pakistan.

If they did participate in their town’s local election, they would only be eligible for the handful of seats reserved for minorities, despite making up more than 90% of the population.

Khan’s supporters say he had no choice but to neutralise damaging attacks from a rival party leader, an Islamic fundamentalist called Fazlur Rehman, who has produced a video showing a PTI activist who, during a meeting in March, asked Mirza Masroor Ahmad, the community’s London-based spiritual leader, whether he would support the party in the elections.

Rehman’s wing of the Jamiat Ulema-e-Islam party is in stiff competition with the PTI in the tribal belt. It said the video proved Khan was an Ahmadi stooge.In recent days, Rehman has even claimed senior clerics have issued a fatwa declaring a vote for Khan as un-Islamic.

Khan has disowned the party worker in the widely distributed video, which, bizarrely, the party claims is a “fake and based on total lies”. 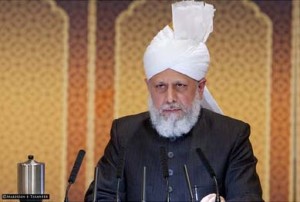 Ahmad, the spiritual leader, claims Khan did once ask for the community’s assistance in the 1990s, soon after the PTI was established. But he said their past experience of backing politicians had made the community deeply reluctant to support untested candidates.

Zulfikar Ali Bhutto, founder of the Pakistan Peoples party, benefited from enthusiastic Ahmadi support. But during his prime ministership in 1974 he passed the first ordinance denying Ahmadis their Muslim identity.

“We will definitely vote for the PTI next time when the party does justice with us after coming into power,” Ahmad said.

But few in Rabwah believe Khan will help their community, even if he does pull off the still unlikely feat of coming to power this weekend.

“In the western press he has reputation for being a secular, former playboy politician,” said Usman Ahmad, a Rabwah resident who moved from the UK nine years ago. “This shows him in a truer light.”