After the Capitol Hill community observed a moment of silence at 8:46 a.m. in honor of the victims of the Sept. 11 terrorist attacks, volunteers went to work in the Rayburn House Office building to facilitate the annual “Muslims for Life” blood drive in the Capitol.

The “Muslims for Life” campaign is coordinated by the Ahmadiyya Muslim Community, a movement within Islam. The campaign began in 2011, the 10th anniversary of the terrorist attacks, as an effort to honor those who lost their lives and serve as a reminder that Islam promotes peace.

“In a time where those of us who are of the Islamic faith have to apologize for many acts of murderers, you all are here offering the best of what our community has to offer — truly affecting what we’re all about, which is saving human life,” Rep. Keith Ellison, the first Muslim member of Congress, said at the blood drive Thursday morning.

The Minnesota Democrat was one of a handful of members of Congress expected at the blood drive throughout the day. He addressed the volunteers along with Rep. Tom Petri, R-Wis., who said he hoped to signify that the Ahmadiyya Muslim Community has bipartisan support.

“I’m trying to support the good works of the Ahmadiyya community,” Petri said. “They’ve been good citizens in my part of Wisconsin.”

“Nobody has ever questioned, then, why I am going to a blood drive which is organized by the Muslims,” Naseem Mahdi, an Ahmadiyaa national vice president told CQ Roll Call. “There was not an issue, you know. Not only here in the Capitol, anywhere in the United States.”

Although the event involved reflection on the 9/11 tragedy, the news that the U.S. will engage in a military action against an Islamic terrorist group also weighed heavily on the minds of the attendees.

In his address at the event, Mahdi pivoted his remarks to ISIS, stressing once again that the Muslim community rejects the acts of violence.

“We condemn this kind of violence. I am telling you, the Ahmadiyya Muslim Community rejects this kind of crime and massacres,” Mahdi said. He later referred to ISIS, adding, “This is not Islam. This is a barbaric plan which will never succeed by God’s help.” 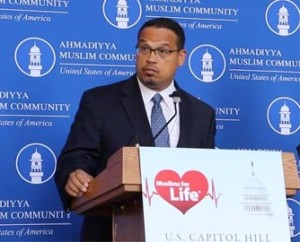 Congress continues to debate the strategy to confront ISIS, but Thursday, as flags flew at half-staff, the Capitol Hill community also remembered the lives lost 13 years ago.

The “Muslims for Life” campaign began with that goal of honoring the victims of the terrorist attacks and works to save others, since one pint of blood can help save up to three lives.

Since its inception in 2011, the campaign has resulted in 906 drives that collected more than 33,000 pints of blood. The goal for this year’s campaign is to collect 13,000 pints, potentially saving an additional 39,000 lives.