On Monday the Indian Vice President awarded an officer from the Ahmadiyya Muslim Community with a Vigilance Excellence Award.

The Vice-President of India, Shri M. Venkaiah Naidu awarded Shri Munawar Khursheed, the Former DIG of India’s Railway Protection Force with the Vigilance Innovation award for his “Outstanding contribution in Vigilance Innovation”. Rasheed who currently serves as Chief Vigilance Officer of Mahanadi Coalfields Limited was credited for implementing an Integrated Fuel Management System which has brought about 100% transparency in fuelling, resulting in the reduction of theft and pilferage of fuel. 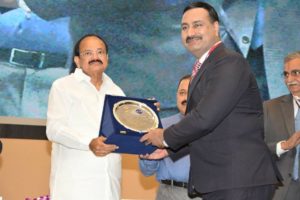 The Vigilance Excellence Awards are awarded to the CVOs, Vigilance Functionaries, and Management for their efforts in fighting corruption and bringing transparency.

Shri Munawar Khursheed is a former Indian Railway Protection Officer who joined the force in 1993 and holds a Postgraduate Degree from the Delhi School of Economics. He has also been trained under the Anti-Terrorism Program at the University of Louisiana, USA and has also undergone Explosives Course at the Baton Rouge Police Academy, USA. Further, he has done the Police Senior Management Course at the UNDP, UN Peacekeeping Training at Peace Operations Institute, Geneva, and Police Image Building Course at the Administrative Staff College of India. 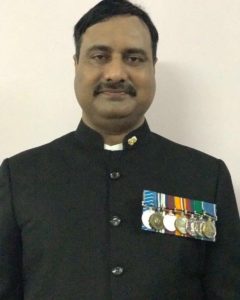 In 2014, on India’s 68th Independence Day, Rasheed was awarded the Indian Police Medal for Meritorious Service by Pranab Mukherjee, the President of India for his “outstanding services” as the Deputy Sector Commander in the UN Mission and for conducting a “successful and peaceful referendum and election for the partition of Sudan in Africa.” He is also credited with negotiating a peace deal between the Sudan and South Sudan Forces. He also has the distinction of having commanded the National Republic Day Parade in New Delhi.