An angry mob set ablaze a factory owned by members of the Ahmadiyya Muslim Community in Jhelum on Friday.

Around 2,000 people surrounded Pakistan Chipboard Factory on GT Road in Jhelum city on Friday night after announcements were made on loudspeakers in nearby mosques that a factory employee had allegedly desecrated the Quran. Following the announcements people from not immediate vicinity but even from nearby villages gathered as a mob and set ablaze the chipboard factory.

The owner’s residence, adjoining the factory, was also set on fire.

The mob, meanwhile, continued to block GT Road in protest. Police were unable to disperse the protesters despite using tear gas and Rangers (Pakistani paramilitary force) had to be called in for support. Many workers fled the factory complex, which contains a residential area, with their families, sources said. But some workers were reportedly still inside the factory when it was set on fire.

The police did, however, arrest three members of the Ahmadiyya Muslim community. Senior police officer in Jhelum, Adnan Malik said “Three members of Ahmadiyya community have been arrested by police under the charges of blasphemy”. Three men were reportedly also injured in this unrest. 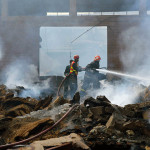 Reacting to the arrests a Jamaat-e-Ahmadiyya spokesperson Saleem Ud Din, said that three Ahmadis were arrested without reason. He asked the government to take action against the responsible persons.

Ahmadis were declared non-Muslims by the Pakistani government in 1974.

Ahmadis have been arrested in Pakistan for reading the Holy Quran, holding religious celebrations and having Quranic verses on rings or wedding cards. Four years ago, 86 Ahmadis were killed in two simultaneous attacks in Lahore.

Pakistan’s controversial blasphemy law does not clearly define blasphemy but says the offence is punishable by death. Anyone can file a blasphemy case claiming their religious feelings are injured for any reason.

The accused are often lynched, and lawyers and judges defending or acquitting them have been attacked. Rights groups say the laws are increasingly used to seize money or property.