On 7th November 2008, the Head of the Ahmadiyya Muslim Jamaat, Hadhrat Mirza Masroor Ahmad inaugurated the ‘Al‐Mahdi Mosque’ in Bradford, UK, with his weekly Friday Sermon, broadcast live across the world from Bradford. Later, the same evening the Ahmadiyya Muslim Jamaat UK hosted a special reception marking the inauguration of the mosque in which various dignitaries from the local community attended. During the reception Hadhrat Mirza Masroor Ahmad, spoke of how Ahmadiyya mosques were true Houses of God, from which only slogans of peace would ever emanate.

More than 2,000 people attended the official opening of the mosque in Bradford . The Al Mahdi Mosque, in Rees Way, Undercliffe, took two years to build.Coverage of the ceremony and the sermon was broadcast across 200 countries on Muslim Television Ahmadiyya. 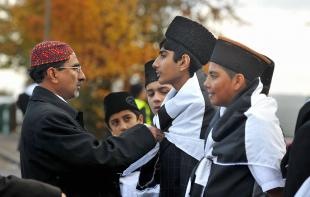