The gathering was then addressed by Councillor Jane Bird, the Lord Mayor of Sheffield who congratulated the Jamaat on its continued charitable work and said that she was proud to live in Sheffield which she said was a city where people lived side by side, respecting each other’s different cultures and beliefs. Next to the stage was Richard Caborn the Member of Parliament for Sheffield Central. He said that recently His Holiness had addressed many of his colleagues in Parliament at Westminster and that the words spoken by His Holiness had had a deeply profound effect on all those who participated. He further commented:

“It is a pleasure for me to be associated with a religion that has as its motto the words ‘Love
for All, Hatred for None’ and that is what we should all follow.” 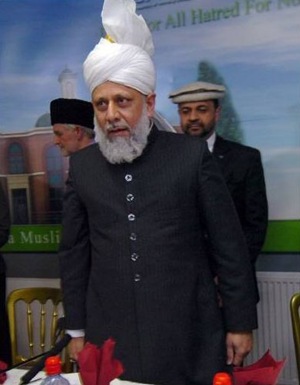