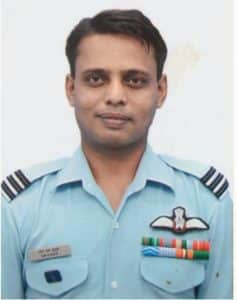 Just days after Pakistan Army issued a statement endorsing the laws against minority Ahmadi Muslims, India made a point by having an Ahmadi lead the 85th-anniversary celebrations of the Indian Air Force.

During the parade which was held at Hindon air base near Delhi, Group Captain Syed Muzzaffer Yunus accompanied the Indian Air Chief Marshal B.S. Dhanoa for inspection.

Yunus who belongs to the Ahmadiyya Muslim faith was awarded the Vayu Sena Medal (Gallantry) in January 2014 for rescuing more than a thousand stranded pilgrims in a single day during ‘Operation Rahat’ in Uttarakhand. Then Wing Commander Flying (Pilot) Yunus was the Commanding Officer of a Mi-17 V5 Helicopter Unit in the northern sector. On June 17th, 2013, the unit was tasked for with a mission to rescue distressed and injured pilgrims from an unprepared and restricted landing site adjacent to Kedarnath temple at an elevation of approximately 11200 feet.

During an interview, when Yunus was asked what was it like for a Muslim to be one of the first to come to the aid of Hindu pilgrims? Yunus laughed out loud and quickly said:

“In the Air Force we are taught only one religion – to be Indian .

A statement issued by India’s Ministry of Defence said:

He was quick enough to pick up the distressed pilgrims……….Throughout that day, he braved and battled against the weather and executed daring landing at untried and unprepared sites…………..He displayed fearless determination and evacuated more than 350 pilgrims in one single day to Joshimath involving eighteen sorties. During these operations, he flew a total of 96 sorties in 46:00 hours and rescued more than One thousand stranded pilgrims.

Ahmadis are the followers of the Ahmadiyya sect of Islam which has been declared “not Muslim” in Pakistan. The Ahmadis face severe persecution both at the hands of Government and extremist groups. In Pakistan, the Ahmadis are denied jobs and entry from educational institutions.

Air Force chief BS Dhanoa had on Thursday said his forces are prepared to effectively counter any threat from China while confronting a two-front war also involving Pakistan.